The last few weeks have been full of good mail days. The latest Knitscene arrived first, then came the Mason-Dixon knitting book (a bargain at just £6 including shipping), and then… yarn! That’s the yarn for my little nephew’s blanket, plus an extra skein of lace for me. Funny thing, as I was entering the details of the lace into my stash, I realised that I already had a skein of laceweight from the same dyer in the same colour. Different base, but still! Apparently I really like teal. It’s not one of my “safe” colours that I usually go for (pinks and reds, for the those who haven’t known me for long), so I don’t know what it is that drew me to it. 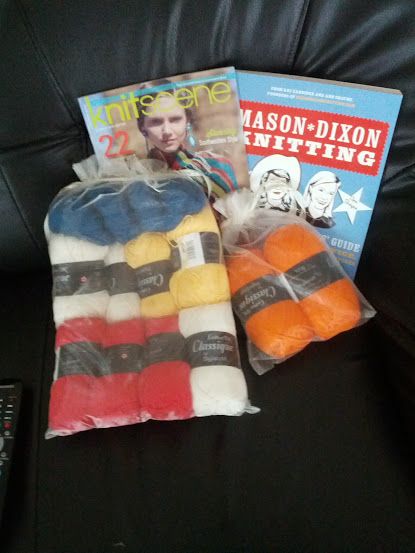 Knitscene Summer 2015, Mason-Dixon Knitting, lace for me and cotton for my sister’s baby blanket

I’m sure you could guess from the above paragraph, one of my many sisters is pregnant! And obviously I’m going to knit for the baby. The blanket, which I’ve started tonight, is the Tamarix Quilt by Heather Zoppetti. I’d mentally queued the blanket when the magazine first came out, so when I received the issue of Interweave Knits (Fall 2010) for free from a fellow knitter in London I was thrilled to bits. I love Heather’s work. I’ve knit at least 5 pairs of socks by her so far and I’ve got at least one of her sweaters in my queue too.

I also came up with another idea for her kids. When she’s too tired or doesn’t have time or whatever, she can play the boys a recording of me reading to them. Since I can’t actually see them as often as I’d like, at least they can hear me. And hopefully learn Finnish at the same time.
I did a test recording tonight (just read a few paragraphs from Little House in the Big Woods) to see if it would work before suggesting it to my sister. Sounded fine to me, just need to find books where turning the pages won’t make too much noise. And as a bonus, it turns out that I don’t hate hearing my own voice! I used to really dislike it, but I’m okay with it now. Just like I used to hate photographs of me, now I don’t.
So the plan now is for us to pick out a book or two when we’re both in Finland for our youngest sister’s graduation. How I’ll find the time to do it in between all of the wedding sheningans remains a mystery.

Speaking of wedding shenanigans, I’ve started my dress. Finally. I’ve cut out and sewn the bodice pieces together. So far so good. I keep looking at the skirt pieces and placing them on the lace and pinning and then unpinning and rearranging and so on and so forth. I’m such a chicken when it comes to cutting. If something doesn’t work in knitting, that’s okay, I can always rip it out and start over without wasting anything (unless it’s mohair, learned that the hard way). But when you cut fabric, that’s it. There are no do-overs in the same sense. I’m still hoping to get the main bits of the dress all sewn up and ready by the end of the month though. Then I’ll take it to Finland with me and get my grandma to help me do the tweaks for it (she used to sew her own clothes). That’s the plan. Here’s hoping I stick to it.