I’m finally at the point in my wedding shawl where I need to decide which pattern to do next. So I’ve been swatching. And re-doing charts (I love charts, btw). And swatching some more. And then swatching again. I’ve churned out at least five swatches just for this section of the shawl. I’ll admit, I was a bit reckless and didn’t swatch at all for the centre bit or the lace bits that separate the points. Then again, those three lace patterns that I’m using as fillers are my favourite patterns of all time (patterning on both sides!) and I’ve used them before, so I was fairly confident that my charts would work out just fine without a test run. 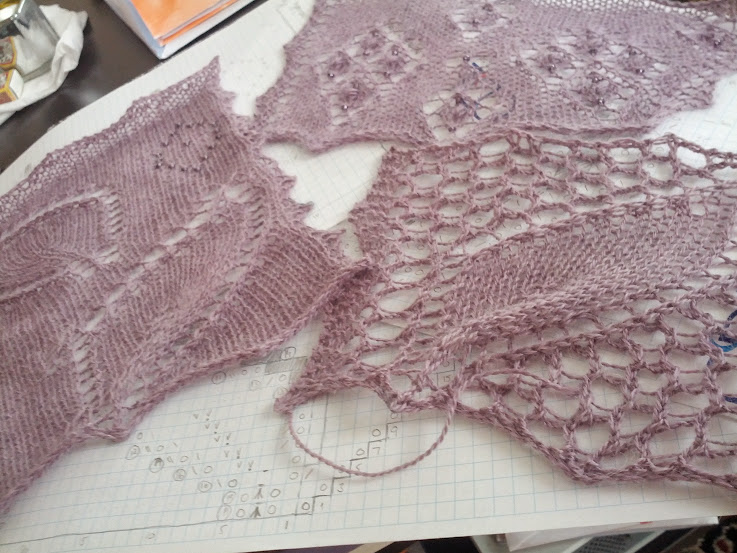 Anyway, it turns out that the leaf motif I’d picked out, while awesome, really isn’t going to work with the rest of my shawl. Which is a shame because in my head it looked fabulous. Reality had other ideas.
But that’s okay too. I’ll just use the leaf motif in something else later on. It’s really pretty and I’ve got plenty to swatches to look at to try to figure out what works and what doesn’t with it.

I think I’ve got it figured out now. I know what the next section will be. I’m just taking a little break from it this week and knitting on N&M’s wedding blanket. Garter stitch is a very nice change from having to pay attention all the time to what patterning I’m supposed to be doing and where to put the beads.

Now I just need to figure out what to do with all of the swatches I’ve created. I’m thinking of possibly framing the ones I really like and putting them up on the walls. Any other ideas?

This entry was posted in Knitting and tagged knitdesign, knitting, wedding. Bookmark the permalink.